I love the ducks; they’re the cutest things, aren’t they? Yesterday I attended a reception and this one was at a small art exhibit in the Park Library. It was much different from the last one I went to, which had been a hectic, loud event in the University Art Gallery, crowded with people of all ages. When I entered the Barber Room, it was filled with beautiful oil paintings – and men and women over the age of fifty. There was only one young person there – a hipster nonetheless – and violin music was playing in the background.

This episode is worse than ‘Side Effects,’ I thought to myself as my courage began crawling backwards into its cave. When my friends and I had gone to see that movie, the theater had also been filled with elders. As though psychology isn’t interesting to young people…

I felt awkward and reluctantly helped myself to a cup of lemonade, but the lady who seemed to be in charge of the event made me feel welcome. Eventually I felt self-confident enough to wander around and observe. I caught some snippets from some conversations and sensed the curiosity from the visitors. 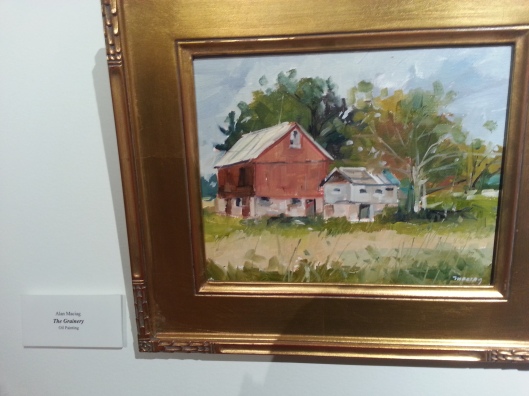 (The light and my lack of camera skills don’t do this painting any justice. I am sorry, ladies.) 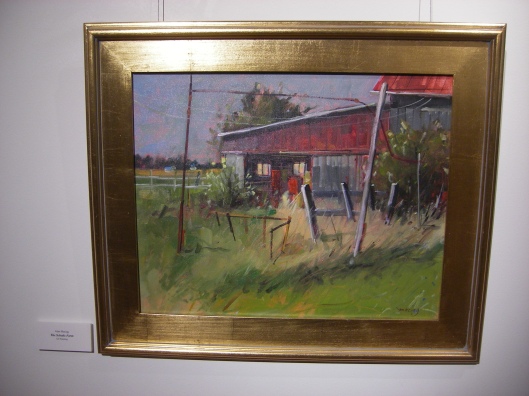 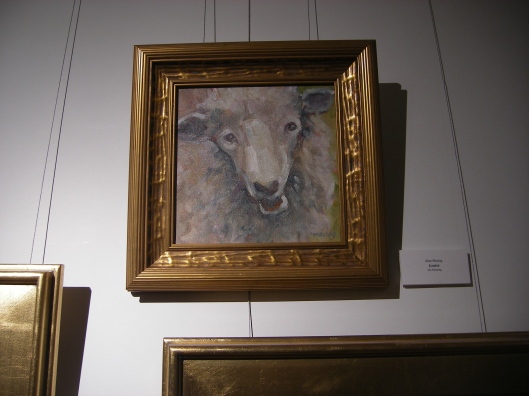 The man responsible for these pieces of art said he painted them on sight in the back of his red truck. His name is Alan Maciag; he is a CMU graduate and retired art teacher. His lecture was light-hearted and fun as he spoke about the sunlight in the morning, the fresh air and the atmosphere, how there was something the moving clouds and the woodpecker sound that drove him.

Every single one of his painting were made briskly since nature never stops to pose for a picture. Maciag has painted the country side, farm animals, barns, clouds and random houses in the area, which the exhibit showed. (He has also work on urban portrayal.) His style is considered contemporary realism, because, for example, his painting of “a cow looks like a cow but in a different way.” The audience laughed when Maciag pointed out that there were people present who had caught him staring at their house, painting.

Maciag began painting more once he moved from teaching in high school to elementary school and got more time on his hands. Today he is a daily painter. “When it’s sunny, I’m outside painting,” Maciag said. As of right now, he has over 300 paintings ready in his studio in Midland, waiting to be shipped out to a dozen different galleries. He added that the pieces in the Barber Room are in fact up for sale and some percentage of the money will go to funding the library on campus. The exhibit will remain there until May 6.

Maciag told us that he uses tone canvases – red orange being his color of choice – instead of simply white and in this painting at the bottom, you can see that color poking through the clouds. Another signature of his is that he tends to use three to six colors on his palette repeatedly, because he’s comfortable with them and according to him, “it has worked well so far.” 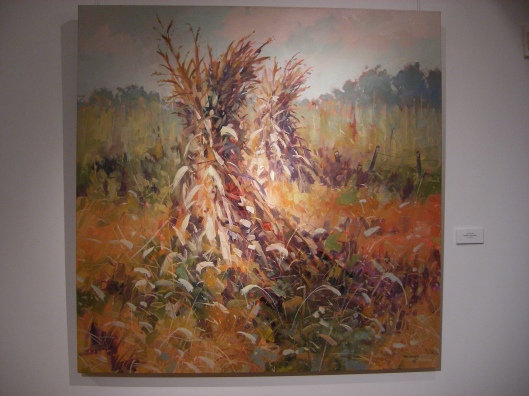 His small paintings take about ten minutes to finish. When it comes to larger pieces, like this one, however, Maciag uses photographs or color studies (smaller version of the picture) in order to have a guide to follow. In regards to the autumn painting here, Maciag said that he did it very quickly later in his studio. “It was as though the picture was shooting off the paintbrush,” the painter said. “I was almost driven by something bigger than me.”

Plein air painters paint from life with a passion like no other in the world of painters. As an ‘open air’ painter, I channel all my sensory faculties to absorb the truth in sight complemented by the atmosphere around me. By placing myself among these magnificent gifts of light and nature, my visions are propelled from my head to my hand to my canvas.

First known as Realist in the 19th century revolutionary painters such as Manet, Monet, Degas, and Renoir collectively gave birth to Impressionism. These Impressionistic masters, as I, embrace the philosophy that I must trust my eyes by physically registering the color of light. This is the basis of plein air painting…to see nature not as form, but rather light on form.

This then is my unique personal ‘philosophy’ of light on form. I use no formulas for painting but have learned to trust my own vision to find truth before me.