“Game at its peak, we speak and believe hype/ Bang in the streets hats cocked left or deep right/ It’s steep life, coming up where niggas is sheep-like/ Rappers and hoopers, we strive to be like/ G’s with three strikes, seeds that need light/ Cheese and recite, needs and BE strife/ The corner, where struggle and greed fights/ We write songs about wrong ’cause it’s hard to see right.”

Here is an image that The New York Times published in January this year, demonstrating the amount of murders in the last decade. 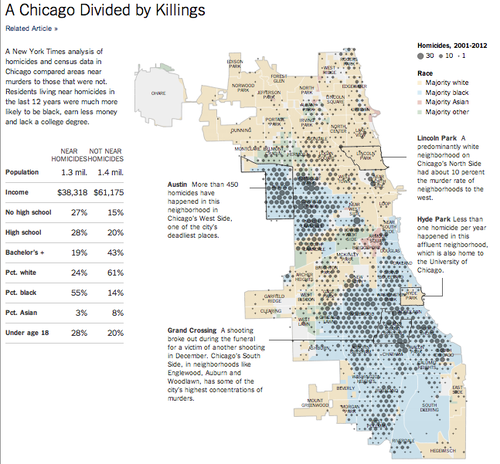 However several news sources are reporting that the murder rate has dropped in the past two months. It decreased 50% in February and an additionally 75% in March. With the turmoil that has risen in regards to the CPS school closings, this is good news for once. The rate has reached its lowest since the 1950s.

There is a stronger police presence in certain areas in the city, which is comforting. According to Complex, incarcerated gang members are also resonating with gangs since they now understand how a life of crime may lead directly to a jail cell.

Dedicated to the 6-month-old who was shot to death last month.

Lupe Fiasco tweeted along with the release of this track:

She lives as long as we do. She will live forever. God bless your soul and the family you left behind. We Love You.

…Not a song but a life. Be respectful. Please keep negative comments to yourself. #lovelifechitownforever

The fight is yet far from over. Jonylah Watkins, six months old, and her father Jonathan were shot on March 12. The baby died from five gun shots. The parent was taken to the hospital in a critical condition but survived. He is a known gang member with a lengthy criminal record.

The idea of losing 54 schools are causing people in Chicago to feel anger, frustration and fear. From my understanding, one of the biggest things parents are feeling angst about is that their child will lose focus on school once they’re stuck in a large class and that they’ll join a gang instead. Since gang violence recently killed a baby, their fears are justified. There won’t be enough cops on the streets to watch everyone hanging out at the corner.

Last month the Lupe Fiasco Foundation held two conferences in Chicago called “Streets on Fire, Peace for Hire.” During the meetings he sat down with a group of teenagers to talk about violence, where it comes from, how they could stop it and so on. In Chicago Sun-Times, the rapper wrote a column mainly about how crime affects the youth in the city. Mr. Fiasco wrote that these young men and women he talked with were witnesses to death, and “not the natural, explainable version of death, but that violent, senseless death that requires one to grow numb, as senselessness is the only natural response in the search to reconcile oneself with the irreconcilable.” (A quote by a 17-year-old man.)

It’s obvious that we need more than police to handle crime, especially violent crime. Near the end of his column, Mr. Fiasco talks about a group called Project Orange Tree, which consists of young people from the Chi. They’re planning to “raise awareness about all forms of violence that come into contact with them and their communities and more so to remove it.” The reason they’re using orange as a symbol is similar to the same reason deer or duck hunters wear orange vests in order to not be targeted and shot by other hunters.

Perhaps Mayor Emanuel pats himself on the back and feels like celebrating the low murder rate, but I think he should promote organizations such as the Lupe Fiasco Foundation and Project Orange Tree. If he truly cared for the Chicago youth and wishes for an even lower amount of crime, it wouldn’t be a bad idea. I find it interesting how kids can come up with more practical options to help themselves while Emanuel sits in his office, thinking that closing some schools and “fixing” the budget will make things better.

**This blog entry was written for ‘Writing for Mass Media,’ JRN202, at Central Michigan University.